Ironman Mode is where players are completely self-sufficient.

How to become an Ironman

When making a new account, you have the option to create a regular account, an Ironman, a Hardcore Ironman, or an Ultimate Ironman. The starting items differ for each game mode. 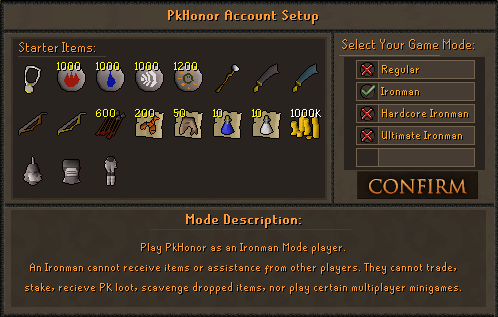 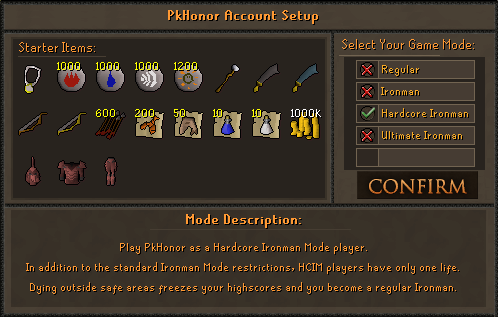 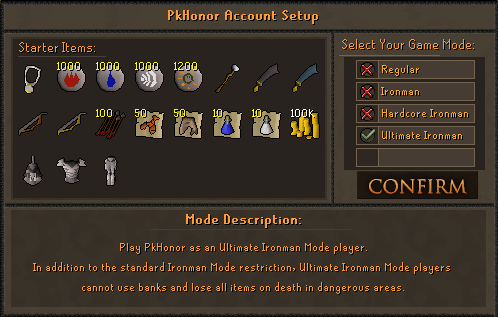 There are a lot of goals that can be set in PKHonor. Here are a few things you could aim for.

Player versus Monster (PvM) is a good way to get money and supplies for skilling, especially when killing bosses. PvM'ing is the most efficient if you have good gear and good combat stats which are ironically (btw) both acquired through PvM itself. Keep in mind that as an ironman you have to do all the damage to a monster yourself and if anybody tanks a hit for you, you won't get the drop. Luckily for ironmen most bosses are instanced (you room for only them) and Wildy bosses can be spawned.

Check the Drop List for items you might want and then look for the corresponding PvM Guide if it's available. 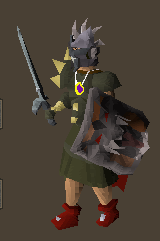 GWD (Godwars Dungeon) is a unique dungeon where 5 bosses roam. To enter the lair of a boss you need get a killcount of 40 by killing minions associated with the god. Or you can bring an Ecumenical Key to skip getting the killcount. Important items to obtain are:

Note that Ecumenical Keys are dropped by wilderness bosses. Those keys let you skip getting the 40 killcount. Keeping one in the bank for the unfortunate moment you die at a boss in the GWD is recommended. You can then easily get your gear back before it disappears forever.

The Wilderness contains some strong bosses for players to kill. They have some very good drops such as supplies, alchables and double the chance of dropping clue scrolls. Ironmen get acces to spawners to spawn those bosses in the Wilderness for themselves. For the Wilderness diary a lot bosses will have to be slain.

Using the correct Prayer is crucial to keep PvM'ing for as long as possible and not wasting food.

Treasure trails are done through Clue Scrolls that are obtained through PvM or some skills (Woodcutting, Fishing and Mining). A clue scroll contains a challenge or clue on how to obtain the next clue or reward chest. Check the Clue Scroll Guide for help on how to complete challenges.

There is a guide for every skill already available at Skill Guides. Below are tips for non-combat skills.

To be able to run for as long as you want you should get at least a few agility levels.

For a bit of starting cash you can do Thieving at ::skilling. 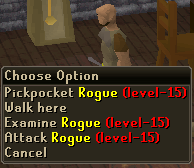 Having high Herblore helps a lot for PvM. To get herbs you need to do Farming. So grab some cash and start farming (spellbook → skilling → Farming). 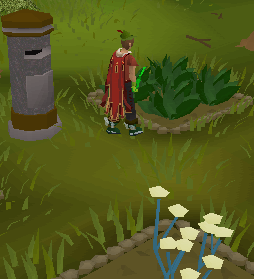 To keep PvM'ing and restore your health you will need some food. Food is acquired by Cooking raw fish cought by Fishing. Grab a small fishing net from the supplies store to get started at ::skilling.

Firemaking as of writing doesn't provide much functionality. There is an easily accessible range at ::skilling for cooking. Woodcutting however is needed to train Construction.

You may have noticed that the Pickaxes and Axes store doesn't sell a higher tier axe than bronze. So you will need to do some Smithing to get a better axe (or kill Dagannoth Kings (DKS) for a chance at a Dragon axe). 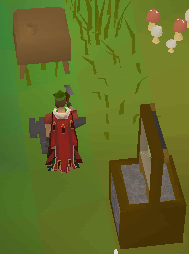 To level up Crafting gems are the easiest way. Buy uncut gems and a chisel from the crafting store then cut them. From these cut gems you can make bolt tips through the Fletching skill.

Since the magic store only sells astral runes to ironmen you will have to craft runes yourself when you want to cast spells. Check the Runecrafting Guide for info on how to get started.

Hunter is a slow-paced skill to train, but it's very rewarding towards the end. 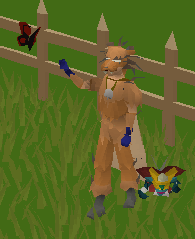 Construction is a skill that takes a lot of time, money and clicking to level, but the skill is extremely worth it.

You will not be able to buy from:

And the following stores have their stock changed:

Ironman will not be able to:

Some parts of the first version of this guide, written by Jonas, are used