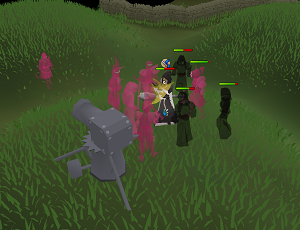 Risky Barrows is a custom version of the Barrows minigame. This game mode is unique to Pkhonor. Players have to fight all 6 Barrows Brothers at the same time. This is a challenging but convenient game mode, as you will not need to go into the barrows or the tunnels.

The Barrows can be reached by using the Minigames Teleport in your spellbook. In order to start the barrows minigame, you must speak to the Weird Old Man who stands on the middle barrow. Select the option that says, “I want to play the risky barrows minigame”. You will be teleported to a separate height. Normal players share a risky barrows height, whereas Ironmen must fight all 6 brothers alone.

A Dwarf Multicannon is required to start the minigame. Set your cannon up anywhere around the barrows. The thunderous sound of the cannon will wake all of the resting brothers. Upon waking, all 6 brothers will become aggressive towards any players in the risky barrows area. Several lvl 159 Shades will also attack the player who placed the cannon if a cannonball hits them.

Magic is highly recommended if soloing, due to the amount of NPC's attacking you. If using Magic, bring runes to cast Blood Barrage. This is a very useful spell for its healing effect. A Salve Amulet (e) will offer increased damage and a passive healing effect as the Barrows Brothers are undead. Bring a Rune Pouch if you have one.

Melee is highly recommended if you are working with a group of players. A Salve Amulet (e) will offer increased damage and a passive healing effect as the Barrows Brothers are undead.

Ranged can be effective here as well if using a Toxic Blowpipe, but Melee and Magic are the preferred attack styles.

Substitute Brawling gloves (slayer) and a Slayer Helmet (i) if on a Barrows Brother Slayer task. Elite Void can also be used effectively here.

A common tactic is to place the dwarf multicannon in the north of the barrows, between Verac's and Dharok's lairs. Standing in the very north spot of the fenced area causes all of the Melee using brothers and Shades to stack up. This allows players using blood barrage to effectively kill the enemies while healing themselves.

If you are using Melee, set up your cannon in the center on Ahrim's hill and Protect from Melee. Kill Ahrim first and then Karil's. The effect of the Salve Amulet (e) will keep your health high.

Unlike the regular Barrows Minigame, the Risky Barrows Minigame only drops the barrows armour pieces. There are no rune/coins/clue drops like there is from the Barrows Chest. The complete drop table for both game modes can be found on the official PkHonor Drops page.