To get to the Void Knight Island, you'll first have to teleport using the Minigame Teleport and then the Pest Control option.

When you arrive on the island, you'll have to run south until you reach a boat with a 'gangplank' in between the boat and the dock. When using the option 'Cross Gangplank' you'll be teleported into the boat and the game will start soon. 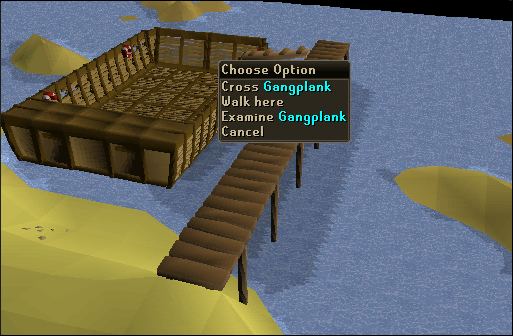 To start a game of Pest Control there are a few requirements:

When fulfilling these requirements, the game is ready to start. When the 'Next Departure' string says 0, the game will start. You'll get teleported into another boat, which is north of a even bigger island.

The objective of the minigame is to destroy all of the portals before the Void Knight dies. 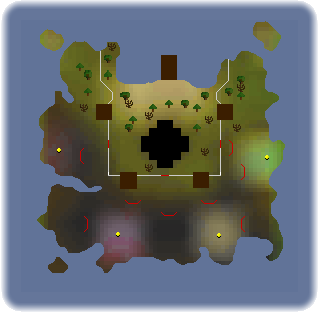 Each portals has 200 hitpoints and low defensive stats. To earn rewards from a round of Pest Control, you need to deal at least 5 hitpoint damage and destroy all four portals before the void knight dies or time runs out, all without dying yourself. While attacking the portals, some minions will spawn. They are a distraction, although a specific minion does have the ability to heal the portal and should be killed to prevent this.

Basic melee gear is sufficient to win at pest control.

When you've managed to kill all 4 the portals, you'll gain exactly 8 Pest Control points & Coins depending on your combat level (combat level x 1,000gp). There is a small chance that after a successful round, your points will be taken by 'Death' for his WildyWyrm minigame.

You can access the reward shop by using the 'Exchange' option on one of the Void Knights. 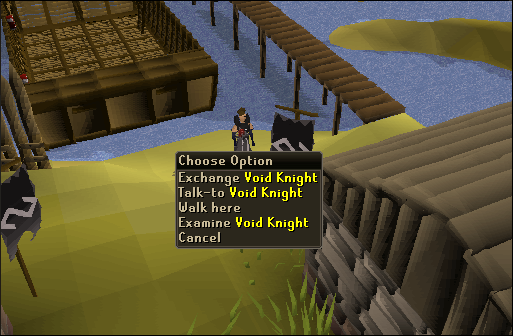 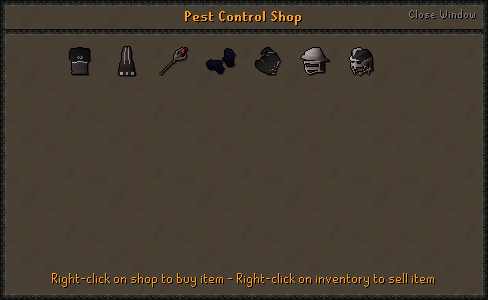 Void Knight equipment can be purchased from the Void Knights with Void Knight commendation points earned through the Pest Control minigame. To buy the items, a player must have 42 Attack, Strength, Defence, Hitpoints, Ranged, and Magic, along with 22 Prayer.

Void Knight armour contributes Defence bonuses to all stats equally (including Magic and Ranged) without lowering any attack bonuses. The set bonus (see below) makes the armour a popular choice for all forms of attack (melee, ranged, and magic).

Void Knight armour has a set effect in addition to each item's stats. These depend upon which of the three Void Knight helmets are worn:

The Void Knight equipment set effect affects the accuracy (but not the damage) of dwarf cannons. [1]

Some information about the Pest Control island: