Castle wars is a multiplayer, combat based, safe, minigame. It is based off the game Capture the Flag. There are two teams, each attempting to capture (cap) the enemies flag by bringing it back to their own base. In addition to scoring, each team also defends their own base, preventing the other team from capping.

Players can get to Castle Wars by clicking the Minigames Teleport > More Minigames.. > Castle wars. This will teleport the player directly into the lobby for the minigame. Additionally, on Fridays, when Castle Wars is an active event with 2x points/charges, players can access the game by typing the command ::event.

When you first teleport to Castle Wars, you will be teleported into the lobby. It contains 3 portals, 1 NPC, and 1 Bank chest. 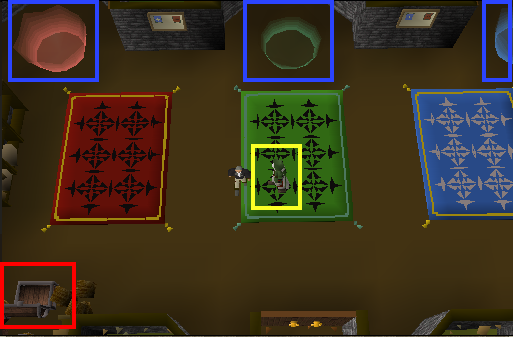 The Bank chest functions similarly to any other Bank Booth, as you can deposit and withdraw from them. From here you can gear up, or bank items you're not allowed to bring

The Castle Wars shop salesman contains the rewards shop, as well as some basic info on certain rewards. This just leaves the portals.

When selecting teams, there are 3 options: Red, Green, and Blue. Each portal correlates to a specific god; Guthix, Saradomin, and Zamorak. Selecting either Saradomin or Zamorak will place you on that team, whereas selecting Guthix will randomly place you on either one, depending on the need for players on each.

As the teams must be close to even in numbers of players, you may receive a message dictating that the team is full when selecting. Simply try joining the other team!

Now, we are ready to select a team, and let the game begin!

NOTE: The game requires at least ONE player on each team to begin. If at any point a team's player count drops below 1, that team will forfeit and the game will be over.

When the game begins, players from each team will be placed in the 'Spawn Room'. This is the room where, if you die during the game, you will spawn again. It contains several important features for gameplay as well.

In it you will find:

Please note that at any time during the game you can return here to restock on prayer or health. When killed, players will spawn here with full health.

Located directly below the Spawn Room, the Supplies Room is home to several key items you will use throughout your Castle Wars game. Each can be obtained by clicking on the table associated with them. Please use the image below to see which table holds which items:

The use for each of these is described here:

Please see below for gif of each one being used:

Each game contains two castles of identical structure, one for each team. Each castle has four levels, as shown in the gif below, each with different features. The top-most level contains the flag the other team is seeking the capture. The level below that has a covered room, which is safe from catapult, and stairs connecting it to the top and to the level below. The third floor and fourth floors from the top are the spawn and supplies. floors, respectively, though the bottom one also features another couple of features, such as the entrance to the underground, the catapult, and the two doors; large and small. The larger door can be broken by attacking it, the smaller can have its lock picked. These are the basic features of the castle. Teams will effectively place players and barricades throughout it in an effort to defend their castle from the enemy team.

The large door and catapult can both be destroyed, the first by attacking it, the second by using a tinderbox or explosive potion on it. Both of these can be fixed with the toolkits obtained from supplies room. The door will increase in health (as seen in the floating menu, bottom right of your screen) by 10% per toolkit. The catapult is a 1:1 fix to toolkit system.

Between the two castles lies a landscape upon which the teams can fight (not that they can't in the castle as well). This battlefield features a couple of important items to heed when playing Castle Wars.

The first of these is the entrances to the Underground. Located on the central island, there are two ladders that lead down, to the subterranean level of the game. From here, players can arrive in the middle from either base, undetected by their opponents. Alternatively, teams could enter the underground here, and continue onward toward the opponents base. Either way, these ladders are two of only four access points to the underground (each castle features an entrance as well, located near the supply room. The second feature to focus on is the river cutting between the two castles, and more importantly ways to cross it. As the river cannot be waded through, players must cross at one of three locations. Either they can cross via the central island, which connects to each bank by bridge, or at jumping stones, one located northeast and another southwest of the island. Players cross these one rock at a time, and must click to jump to each, with a delay. These are rarely used, as it is often quick and more effective to simply cross over the middle.

Located beneath the battlefield and castles, there is a system of tunnels that connect both castles to one another and to the central island of the minigame. Teams will often use these tunnels to travel, as while underground they are not detectable or vulnerable to the catapult's fire.

Please see below for a map of these tunnels, courtesy of RS.

As can be seen on the map, in addition to the connections to both castles and the island, there are mining areas. Here there are collapsed rocks, which players must clear before continuing. Once they are cleared, though, players can again collapse the wall of the cave by click the wall on either side and selecting collapse. The debris can also be cleared by using two explosive potions on it, though collapsing it again requires only one.

Players trapped beneath the rubble as it collapses are instantly killed. Be wary of teams trying to trap you!

As you will be working with other players on your team, there are strategies that will allow your team to most effectively function, and, hopefully, win. This section will only give a brief outline of what a few are, more will be learned simply from playing the minigame!

The first of these I wish to discuss is barricading. Known as cading in game, this is the placement of barricades on the map to hinder attackers from stealing the flag. They are generally placed near stairs that prevent the attackers from leaving a level, so that they can be frozen and killed before escaping with the flag. This is a pivotal piece to any strong defense, and will be implemented in 99% of games.

Rushing is the act of charging a large portion of your team at the enemy's base in an effort to overwhelm them to grab the flag and capture it. With the sheer number of players, the hope is that one will get past and make it out safely. However, this leaves your home base unguarded, or at least weakened, so the enemy can counterattack.

When the opponent's team rushes, their base is fairly unguarded. A successful strategy can be to attempt to capture their flag during this time. While most of your team defends the rush, a couple can easily infiltrate the opposing castle.

Using Zamorakian and Dragon spears is effective, as they stun players, preventing them from healing with bandages. This is effective, and it's good to have at least 1-2 spearers on your team, defending.

Some things to always remember when playing Castle Wars! (Credits to Nick)

These are just a few tactics. More can be learned from playing Castle Wars itself, or asking experienced players.

When playing castle wars, there are two key setups to look at. That of the defender, and that of the attacker.

When defending, you want to have the best possible mage gear. That means Battlemage/Trickster > Virtus > Ahrims

When attacking, you want the highest possible mage defense. That means Vanguard/Trickster > Pernix > Armadyl > Karils. A divine ss will also help when rushing toward, but please note you cannot wield a shield or sword when holding the flag.

For playing this minigame, players are given tickets. They are spent for rewards from the Castle Wars shop salesman. Players can earn tickets during the game by capturing the flag and by killing other players. Tickets during games are earned in increments of 0.5 at a time. Every action that is deemed 'useful' adds to your counter and every time the counter becomes an integer, you get a ticket. For example, killing two different people (or the same person five minutes apart) grants one ticket, as does killing one person and capturing one flag. Returning your flag does not add to this counter. (Credits to Rawr)

Players also earn tickets by completing a game of Castle Wars; more tickets are given to the winner than the losers, and equal numbers are given if the game is tied. The more players are in a game, the greater the rewards at completion.

The rewards shop can be viewed by right-clicking the Castle Wars shop salesman and selecting 'Trade'. He is found in the Castle Wars lobby. The rewards cost anywhere from 20 tickets (any decorative piece) to 1600 tickets (hybrid helmets). See below for an image, and list of items available.

Here are the stats for each set, but keep in mind, the sets are not fully charged when are bought, to charge it you simply play the Castle wars minigame and only then the Stats are better than Virtus/Druidic/Pernix. Remember that each one also gets a 20% accuracy boost when worn as a set. 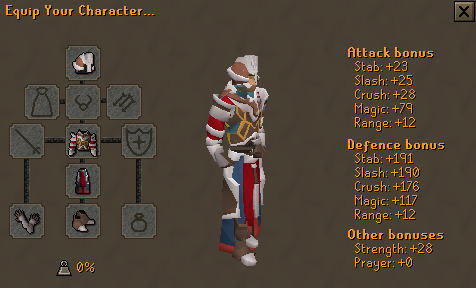 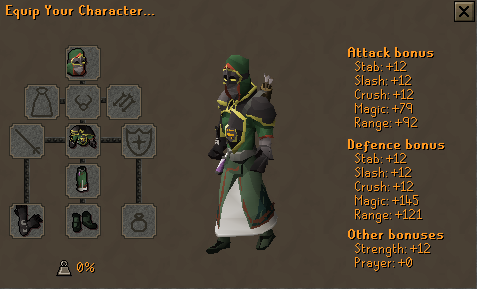 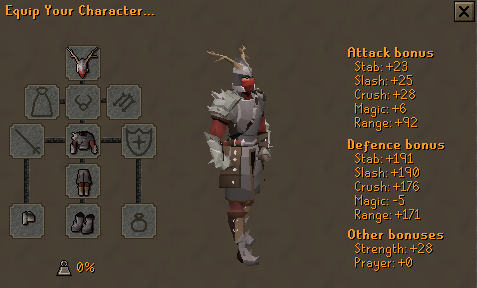 Credits to Jonas, Nick and Rawr for helpful insight

Uploaded to Wiki by: Jonas