This page has a strategy guide here
All information on mechanics and strategy will be on that section.

Scorpia is a large female scorpion that resides in a cave beneath the Scorpion Pit. She is a powerful scorpion that can drop one of three shards required to forge odium wards and malediction wards.

Once killed, she will respawn in ten seconds.

Ironman Mode players have the ability to spawn this boss at a summoner in the wilderness.

Scorpia's magic defence is low so using magic attacks are recommended, and it is best not to get within range of her melee attacks, which are relatively accurate and can hit hard. 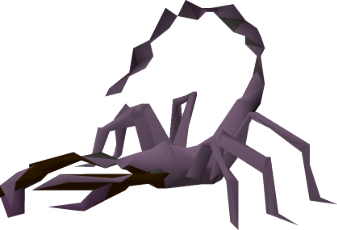 Scorpia's guardians appear while fighting Scorpia. Two appear after Scorpia reaches 100 health or lower. Unlike her and her offspring, the guardians do not attack the player but instead heal Scorpia, shown with a telegrab-like animation. The guardians have 70 Hitpoints each and can be killed to stop their healing effects or can be bound with ice or binding spells. If they do not heal Scorpia in 15 seconds, they will despawn. Unlike Tz-Tok Jad's Yt-HurKot healers, they will not appear if they heal her back to full health.
The guardians will keep on healing Scorpia even if she is at full health, so they will never attack the player, nor will they retaliate back if they are attacked. 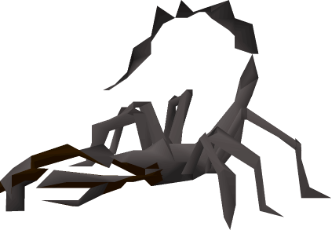 Scorpia's offspring are tiny scorpions that inhabit Scorpia's cave. They attack with incredibly accurate Ranged that drains the player's Prayer for every splash and have a chance at poisoning you. (capped at 6 damage).

Scorpia is located at Level 54 wilderness, in a cave beneath the Scorpion Pit east of the mage bank in a multi combat area. The fastest way to get there is by using the lever south of edgeville, going north a bit and then going east. An alternative route would be using the Mage bank teleport in the PvP teleports on any spellbook pulling the lever and going east.

The most effective way of killing Scorpia is to use melee with the Protect from Melee prayer. Or you can use binding or freeze spells (e.g Entangle, Ice Blitz or Ice Barrage) with the Protect from Missiles prayer (since the offspring are aggressive) and farcasting her. Scorpia's magic defence is low, and it is best not to get within range of her melee attacks, which are relatively accurate and can hit hard.

Once Scorpia reaches half health, she will summon two guardians for 15 seconds, which will heal her, similar to the Yt-HurKots from TzTok-Jad. However, the guardians will continually heal her rather than attacking the player if they are attacked. The guardians have 70 Hitpoints each and can be killed. It is better off using Entangle or Ice Blitz (or Barrage), as they will despawn after 15 seconds have passed if they have not healed Scorpia in that time frame. Unlike Jad, these guardians only spawn once; if they manage to heal Scorpia back to full health (and are killed or despawned), they will not reappear again when Scorpia falls at half health.

The suggested gear for Scorpia is melee-only focused gear.

It is very important to note that with any of these setups, you will be risking all but 3 or 4 items while in the wilderness. Only take items that you are willing to lose! That being said, this guide will provide high, medium, and low tier items for each slot and each setup. It is up to each player to chose what he or she is willing to risk! If you are on a slayer task, a slayer helm should be used. Scorpia is not immune to venom and poison; therefore, using a trident of the swamp, toxic staff of the dead or serpentine helmet is highly recommended due to its venom capabilities.

You should always bring at least a few super restores into the wilderness when PvM'ing. Super Prayer potions do not restore stats, and Overloads do not work in PvP. If a PK'er attacks you, and Saradomin Brews are your only means of healing, your stats will all be reduced. When your magic level is reduced, the PK'er will land every single freeze/entangle.

For this setup you'll be getting a lot of drops quickly, so you don't have to bring as much supplies as you would need with any other wilderness boss.